The Anomaly of the Pilfered Painting 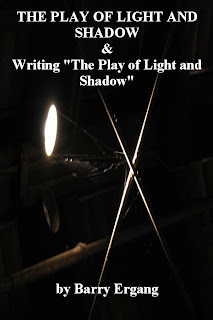 Though I’ve been looking at various Crime Kings lately, I would now like to do something that can be best described through the words of John Cleese: “And now for something completely different.” Thus, I would like to take a look at a short story entitled The Play of Light and Shadow, written by fellow mystery aficionado and JDCarr forum member Barry Ergang. I first read this story when I was trying to write an impossible crime story of my own (which I still work on, on an off-and-on basis), and remembered highly enjoying it. Revisiting it after all this time, I was delighted to discover that it held up just as well on a re-read.
The Play of Light and Shadow is narrated by Dr. Alan Driscoll, a university professor on sabbatical. Tired of the monotony of departmental politics, he gets an interim job as bartender, where he meets private eye Darnell, and discovers in him a fellow lover of literature.
Meanwhile, Dr. Barton Gaines, a colleague of Driscoll’s and the Chairman of the Art History Department, has purchased a painting entitled “Nomad” by one Charles Riveau, a celebrated painter who specialised in forgeries and theft. Riveau’s ex-partner in crime, Paul Marchand, is a shadowy figure who reminds me a lot of the insane Laurent from John Dickson Carr’s It Walks by Night: the mere mention of their names is enough to send a chill down your spine. Nobody knows what he looks like, and the French police have no record of him anywhere, but he and Riveau collaborated in daring thefts and forgeries for years. Riveau ended up going to prison, and once released, he wanted nothing further to do with Marchand, which understandably cheesed him off, though the extent of his wrath is somewhat unreasonable: he vows to destroy any chance Riveau has of attaining fame, stealing the artist’s paintings from galleries and destroying them.
Naturally, this has Dr. Gaines worried, especially as he is planning to exhibit his new acquisition and Marchand has a tendency to snatch paintings on similar occasions. But Driscoll brings the problem to Darnell, who agrees to play babysitter for the painting during the party. Darnell sits outside the windowless gallery, to which there is only one entrance, which is locked. A search is made of the gallery, and nothing suspicious is found, so the door is locked; but when the door is unlocked and the guests walk in, “Nomad” has disappeared, as if spirited away by magic.

Barry’s story is truly excellent— I managed to deduce much of the “how” before Darnell unveils the answer, but I was a complete dunderhead about the “whodunit?” angle. The impossible problem is a very clever one: the solution is neat, some aspects of it are surprising, and it is scrupulously fair in its clueing, virtues that are admirable in any impossible crime story. The plot is solid, interesting, and well-constructed, as Barry decides to make his impossible scenario theft. Murder will interrupt the proceedings later in the story, but you’re given one problem at a time and I think separating the impossible theft from the very-much-possible murder was a wise move.
I really admire the writing style as well, which is engaging and evocative, such as when the painting “Nomad” is vividly described. Barry is more into the hardboiled school of detection than I am, though I confess my experience with it is somewhat limited. This story strikes me as a traditionally-told hardboiled story, and it is told very, very well. We have some of the usual staples, such as a rough-necked cop Darnell contemptuously describes as a cretin. But none of the flaws I associate with the Hardboiled School make their way here: the characters aren’t perfect little angels you’d love to meet in real life, but they’re not all nasty and irredeemable. Darnell does not make being an arrogant, whining, hypocritical pain in the derrière a governing principle of his life, and this is key. The hardboiled mystery really requires an engaging detective for it to work, and Darnell delivers the goods.
Another major plus about this story is the dialogue, which is excellent. It is intelligent and the banter is witty and amusing, with some genuinely funny one-liners sneaking their way in there. I particularly enjoyed this reply when the detectives ask someone where photographer Derek Trevor is, getting this reply: “Prob’ly taking pictures of the scull’ry maid. […] Just what the hell is a scull’ry, and why does it need a maid?”
In fact, just about the only criticism I can honestly make is about the technology. One of the characters is a photographer named Derek Trevor, and his camera baffles me, as I don’t recall ever seeing a camera that uses computer disks. I’m not entirely sure what kind— floppy disks? CDs? That seems like it would make for a far bulkier and more awkward camera than one that used good, old-fashioned film. Then again, my father, something of an amateur photographer, valiantly resisted digital cameras until about 2005, so I might have missed news of such a camera’s existence.
All things considered, Barry Ergang’s The Play of Light and Shadow is a triumph and a real pleasure to read. I highly recommend fellow mystery fans to take a look, as it manages to fuse the impossible crime and the hardboiled story together in an effective and pleasing way. It can be purchased here in e-book form for merely $0.99! It’s definitely well worth the investment and I applaud Barry for writing this excellent story.