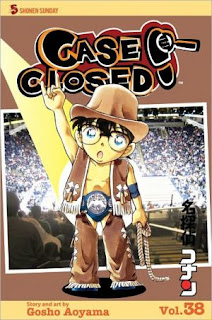 Not too long ago, I read the entire English-translated series Case Closed to date, in about a month. It’s a manga series by Gosho Aoyama, and although I’m really not into the recent manga craze, Case Closed (a.k.a. Detective Conan) really caught my imagination. It’s an interesting series with characters I enjoy following around, and it uses a lot of imagination and creativity in its mysteries. Throughout the series, you’ll get clever locked room mysteries (my favourite has to be in volume 19) maniacal killers isolating groups of people somewhere remote (be it an island, mountaintop, or mansion), serial killers terrorizing the city, inverted murder mysteries, and an ongoing storyline where Conan tries tracking down the syndicate that is responsible for shrinking him down to first-grader size. It’s plenty of fun and highly enjoyable, and today I at last got to sit down and catch up with the most recent volume of the series, Volume 38. Overall it’s an enjoyable, solid volume of stories.
A New Weapon!

This is the concluding chapter to a thrilling cliff-hanger from Volume 37, where Conan is on the hunt for the syndicate in black. He sets a meeting for a train station under construction, and… well, to say more would be inconsiderate! It’s part of the ongoing storyline and it’s a very interesting instalment.
A Surprising Treasure
Conan’s friend Amy gets a set of Girls’ Day dolls and chaos ensues when a theft occurs in the apartment the kids are in. Apparently, someone has stolen a valuable scroll, which has been insured for 20 million yen. The major clue is a visual one and one that won’t be caught by the non-Japanese, but once the clue’s pointed out, nothing really stands in the way of solving the mystery. Overall, a good entry in the series, though not the best one.
The Shadows of the Wolves
Conan, Rachel, and detective Richard Moore (known as “Sleeping Moore” due to his excellent deductions when he appears to be sleeping— but it’s really Conan who has knocked Moore out) attend a wrestling match. A wonderful thing, to be sure, but the television broadcast is definitely going to be censored when one of the wrestlers is stabbed by a man wearing a mask that iconic wrestler Wolf Face uses. The crime was caught on camera, but due to the mask, the suspects can only be narrowed down to their physique. It’s a good story with an excellent deduction that wraps the case up neatly.
Harley’s Struggle
The previous stories use imaginative, unique titles for its chapter names, but this returns to a boring numerical system with a generic title for the tale. Here, it’s “Harley’s Struggle”, in which superstar young detective Harley Hartwell is forced to crack a code at gunpoint by a woman lawyer who’s been on the shady side of the law lately… The code is one of the rare cases of codes that don’t rely on something only Japanese readers will understand. However, I’m one of those people who, upon seeing a code in a mystery novel, immediately carry forth with the story. Otherwise I will inevitably lose what little sanity I have left.