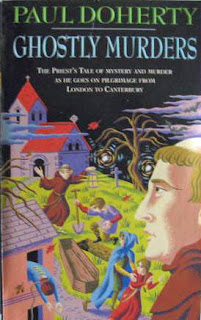 Paul Doherty’s An Ancient Evil was an excellent book, but it also set the bar for his “Canterbury Tales” series very high. This begs the question: would other books in the series rise up to the occasion, or would they fall short of the first book? However, being a foolish mortal, I skipped A Tapestry of Murders (Being the Man of Law’s Tale) and A Tournament of Murders (Being the Franklin’s Tale) and I went right to 1997’s Ghostly Murders, Being the Priest’s Tale.
Ghostly Murders is told by the Poor Priest, and the introduction is bone-chilling, as we see the Spectantes (“Watchers”) and hear them chant their ominous words to the priest: “Spectamus Te! We are watching you!” As in An Ancient Evil, the priest is prompted to tell his story, and as he goes on, we get more and more hints that this story really took place.
Phillip Trumpington and his brother Edmund are priests, and Phillip has been appointed the parish priest in the little village of Scawsby. They have brought their friend Stephen Merkle with them, and Stephen, a mason by trade, plans to build a new church in Scawsby. But something is just not right with the village: the church is haunted by the ghost of a wicked priest, Romanel, and there are legends of Knights Templar being massacred nearby, their treasure taken from them by villagers under Romanel’s command.
Some of the most eerie scenes in the novel come as mist forms and whispers are heard, chanting “Spectamus Te, Semper Spectamus Te!” (“We are watching you, we are always watching you!”). As the novel progresses, we get everything from a battle with the French to a haunting exorcism scene; and all throughout, those mysterious figures linger on as the apparitions get more grotesque, bizarre, disturbing, and frightening.
The mystery this time is far clearer, and Doherty integrates the supernatural flawlessly. What did happen on that misty night in 1308, practically eighty years before the main story begins? We see the events of that night unfold from a third-person perspective as a prologue, but we don’t see the entire picture. What great sacrilege was committed that Romanel keeps haunting his old church? What do the whisperers want and how can these hauntings be gotten rid of—what sort of reparation can be made? Who is this mysterious Veronica who keeps popping up? What does the local coffin woman, apparently one of Romanel’s by-blows, have to do with the case? And why the fixation on eyes watching? 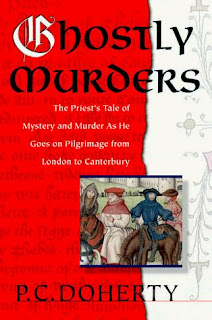 Doherty throws in some brilliant clues to this—one of the best involve the crazed writings of a man involved in the massacre of the Templars, who keeps mentioning Veronica, eyes, and the numbers 6 and 14. The numbers in particular have a brilliant significance, and it’s so obvious once it’s revealed that I wanted to kick myself. The mystery is a complex one. All those questions I outlined are part of a complex web that Doherty successfully resolves. The answers are again somewhat guessable, but some of the clues are brilliant and not all of the answers are easily obtained.
Doherty seasons everything with a strong sense of the supernatural— there is great evil in Scawsby, and it slowly gets more and more disturbing. The first time you see Romanel’s ghost, he claws at the air and shouts at Phillip to “kill her”! Romanel slowly becomes more violent, and you’re not quite sure what the ghost’s game is, and whether the ghosts of the dead Templars are on the priest’s side or not.
I have but one complaint, and it is entirely my fault: I seem to have spoiled a major plot twist or a strand of plot that would be introduced in one of the two books that came before this one. I won’t give any hints, but suffice to say that it was a silly move and I highly recommend any reader to start reading The Canterbury Tales series in order, starting with An Ancient Evil. The first book is referenced here quite often, and some of the ambiguities of the first book’s ending seem to start forming answers. Whether or not they eventually are answered has yet to be seen.
Overall, Ghostly Murders is an excellent ghost story and a solidly constructed mystery, with devilishly clever clues, tight plotting, and excellent atmosphere that gets more terrifying as the book goes along. Once again, I loved it, but I’m not sure just where I’d rank it relative to An Ancient Evil. Is it better? Is it worse? Do you really care? Like its predecessor, it’s an excellent and highly entertaining read, and that’s all that really matters.