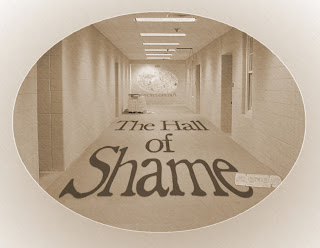 Yesterday I posted an article celebrating the best of 2011, but today it’s time to get the furnace fired up to dispose of the literary cadavers I stumbled across throughout the year. I created a tag which I dubbed the “Hall of Shame”, the tag I used for books that had something they ought to have been ashamed of. At times, the book itself wasn’t to blame, but there was still something inextricably, unequivocally, vociferously awful about my experience reading it. Unsurprisingly, many of the entries in the list below made it onto the Hall of Shame, and a few were so awful I neglected to apply the tag until now. But some of these books had enough merit to keep them off that list.
So without further ado, here are, in order of severity, the worst reading moments I experienced in 2011:

10. The Care Bears Solve a Murder… or, An Unsuitable Job for a Woman by P. D. James
I did not enjoy listening to an audiobook of An Unsuitable Job for a Woman. It is unquestionably one of the worst audiobooks I’ve ever listened to, as the narrator did her very best job to suck all the excitement out of a pretty good story. Her voice grated my nerves, and she read Cordelia Gray’s lines with a disgusting, surrupy-sweet voice full of childlike innocence. While Cordelia’s no Phillip Marlowe, she’s also not a Care Bear. The recording did no justice to her character, and when, in a fury, I finally turned the darned thing off, I found that I genuinely enjoyed reading the finale myself. Nevertheless, even the powerful finale was slightly marred by a phrase that rather offended me and which seemed pointless in the grand scheme of things. 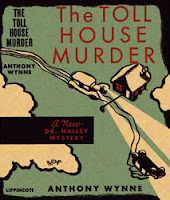 9. It is a tale told by an idiot … signifying nothing… or, The Toll House Murder by Anthony Wynne
Anthony Wynne’s The Toll House Murder begins with a genuinely interesting scenario, with a locked-car murder and virgin snow. Unfortunately, it all goes downhill very quickly. Wynne’s writing style is the dullest I came across this year, with absolutely no reason to care for any of the characters. It was dull, dull, dull, and by the end I couldn’t care less how the crime was committed— which isn’t helped when a needlessly complex solution is proposed to replace a nicely simple one, for the simple reason that the detective says so. Plus, the murderer was either very lucky or had to deal with very stupid detectives to get away with the second impossible crime… or else it simply defied the laws of physics. (Hey, it happens every day…)

8. Hi underftan jew ferpectly… or L’Homme à l’envers by Fred Vargas
Let me get this straight: there’s very little wrong with Vargas’ book. Vargas is a superb stylist who constructs a very interesting plot, and although the clueing’s a bit thin, it’s a perfectly acceptable book at the end of the day. My problem lies with the editing, which can only be explained if the editor was drunk. It is the most atrocious proofreading I’ve ever come across—lines are reprinted twice, mistakes abound everywhere, and most atrocious of all, the endings of several chapters are completely butchered, with bits and pieces of other chapters somehow managing to find their way where they never should have been. It makes a Harry Stephen Keeler novel look sane by comparison. I have no idea how the editor could let this atrocity happen, but it’s made me hesitate over reading my other two Vargas novels, all from the same publisher.

7. What makes you think it was murder? or, Before the Fact by Francis Iles
Francis Iles was the (other) pseudonym of Anthony Berkeley, who tried to advance the murder mystery beyond its stereotypical borders. He usually did a fine job, but he really struck out on Before the Fact. While its beginning is great, its eventual fall is only mightier because of it, as a remarkably stupid woman spends a long time doing incredibly stupid things and wondering why her life is such a misery as a result. Words fail me to describe the sheer stupidity of the ending, and the main character makes personal choices that make Bella Swann’s look good. 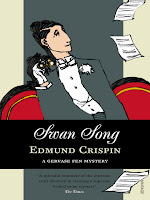 6. The butler did it! or, Swan Song by Edmund Crispin
Do you hate books that give clues on the front cover about the solution? Well, you’ll love Four Square Press’ edition of Edmund Crispin’s Swan Song—it doesn’t give you any hint to solve the case. It just tells you whodunit. It holds nothing back, it just gives you the bloody solution. The editing of the book is itself unimpressive, and the plot summary at the back is so error-riddled it makes me wonder if nobody on the staff read any part of the book except for the ending. It’s the worst edition of any book I’ve come across this year, and it spoiled a fine mystery novel. The person in charge of this awful cover is kindly requested to go to that not-so-good-place-down-the-road-from-heaven. Enough said.

5. Life sucks... or, The Long Goodbye by Raymond Chandler
For someone who extolled realism as much as Raymond Chandler did in his essay The Simple Art of Murder, his works are no more realistic than a typical Golden Age novel. But he pretends it is—and there’s the key to the affair. This book begins well but when it stretches its plot’s credibility in ways that would shock even Carolyn Wells, it tumbles down. I simply couldn’t take it— Chandler couldn’t plot to save his life, and I saw just where he was headed a long time before he got there. It was a long, dull trek and I had better things to do than see it through to the end. It’s an unpleasant book with unpleasant people being as unpleasant as possible because that is realism. Right?

4. Julian Symons rewritten… or, Talking About Detective Fiction by P. D. James
Talking About Detective Fiction could charitably be called a mess. It is like Bloody Murder if Julian Symons hadn’t bothered to read up as much as he did on the genre and if he liked Agatha Christie, Dorothy L. Sayers, Ngaio Marsh, and Margery Allingham a bit more. It contains nothing original about the genre, only the same old clichés we’ve heard over and over again. James at times demonstrates complete ignorance over her subject matter, such as her far-too-literal take on Ronald Knox’s famous “Chinaman” rule for detective fiction. She simply comes across as someone who has no idea what they’re talking about but who won’t let a minor detail like that get in the way of their lecture. The only parts of the book worth reading are James’ insights into her own writing— but even these brief segments don’t save the book and certainly don’t justify the outlandish $30 cover price.

3. Sex, fight, fight, murder, sex… or, I, The Jury by Mickey Spillane
This book disgusted me. Mike Hammer is a scumbag depicted as a hero and his cruelty to all mankind is truly abhorrent. The plot is paper-thin and transparent, relying on well-known clichés. Much of it is left unexplained, and attempts to make Mike Hammer sympathetic are laughable, particularly his sadness when a typical mentally-retarded character is killed. I can see why he was such a hated author—it’s nothing but wish fulfillment, with plenty of fascist morals thrown in and a truly disgusting “hero”. It made me sick—but not literally. No, that honour went to…

2. Killing socially awkward people is funny! or, The Affair at Royalties by George Baxt
This book started off well, with an imaginative scenario… and then plunged downhill. It recovered briefly and then did the same thing. Every good idea is tossed aside, logic is thrown to the wind, and the plot couldn’t be more transparent if it was written on glass with invisible ink. The characters are genuinely disturbing, and the “comedy” at the expense of Agatha Christie is truly infuriating, because it doesn’t understand Agatha Christie at all. In fact, it’s the only book this year that made me physically sick—when I reached the 40 page mark, I put the book aside and shortly afterwards was sick over the entire floor. Science might attribute this to something else, but I like to think it was entirely the book’s fault. It’s been stuffed at the bottom of a drawer and if necessary will be pulled out to toast some marshmallows in the summer—but then again marshmallows toasted on its fumes might become poisoned. 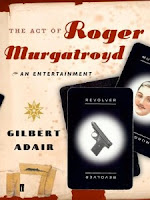 1. Aren’t I the clever one? or, The Act of Roger Murgatroyd by Gilbert Adair
I read and reviewed this book prior to the author’s death earlier this year, but I haven’t altered a single word, nor do I intend to. Death is never something to make a joke about, and I’m sure that Adair had many friends who will miss him. I’m personally impressed when I hear of his accomplishment in translating La Disparition into English as A Void, keeping the original book’s stricture of entirely omitting the letter e! But this doesn’t change my opinion about The Act of Roger Murgatroyd one iota: I consider it one of the worst mysteries ever written. It follows in the grand tradition of George Baxt’s The Affair at Royalties, but with the book’s flaws being even more concentrated. It’s long, it’s plodding, it’s not funny, and it seems to genuinely hate the Golden Age mysteries I adore. The writing style is chock-full of clichés, and if it is meant to reflect the writing style of Golden Age mysteries, it just proves my point that the author knew nothing about them. Although Adair claimed to love Agatha Christie, I seriously doubt it because he shows no understanding about her style at all. The book contains an interesting idea at its core, but the execution is inept. The detective, Evadne Mount, is a rip-off of Agatha Christie’s Ariadne Oliver, but with all the things that made Mrs. Oliver fun removed. There is nothing that I enjoyed about this book—all the half-decent jokes are strangled to death, the one good idea is poorly carried out... and throughout the book, Adair smirks at the reader, pleased with himself and his own cleverness. He even discusses G. K. Chesterton only so he can throw in the line “Gilbert is a genius.”
***
And so, those were the ten worst moments of 2011 on this blog. Now please put your gas masks on: these atrocities are about to get incinerated and the fumes could be toxic…
Thank you for taking the time to read this post. I invite you to check back in again tomorrow when I talk about the most exciting discoveries I made in 2011.