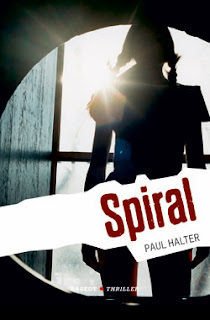 Ever since “discovering” him last year, I’ve been a devoted admirer of Paul Halter. Over the last few months, three new books have been planned for release, and I’ve been excitedly keeping track. Le Voyageur du Passé (The Traveller from the Past), a brand-new Dr. Alan Twist adventure, is due to be released next week. Another was Halter’s second short story collection, La Balle de Nausicaa (Nausicaa’s Ball) which I reviewed soon after its release. The third book, Spiral, was released earlier this month.

Spiral marks an interesting departure for Halter—it is a young adult novel set in the modern day world, a setting he has avoided in novels and used sparingly in short stories. When I had the honour of interviewing him a while back, I took the opportunity to ask him why he chose to write a novel set in modern day. The answer was simple: the publisher, Rageot, commissioned the book as part of its brand-new “Thriller” line of books, and one of the conditions was to set it in modern day. “I considered it my duty to initiate young readers to the locked-room mystery!” M. Halter said at one point. But did he succeed in doing that?


In my opinion: yes, undoubtedly so!

Let’s begin with the story: Quentin Leroux is the boyfriend of Mélanie Rivière, who is sent off to the region of France known as Brittany. She is to stay with her uncle, Jerry Lemaître, proprietor of an abandoned hotel that has a haunted reputation. During the 1930s, a rich Englishman built the hotel and ended up going mad, murdering his wife in a room at the top of a tower, nowadays accessible only via a spiral staircase (hence the title). The place is reportedly haunted— people who stay there complain that they cannot get any sleep, and they see a ghostly figure of a woman.

Oh, and have I mentioned there’s a deranged serial killer working in the area, strangling young women? Sounds like a great place to send a teenage girl for her vacation! (Meanwhile, her parents are off trekking through the Moroccan desert…) But you haven’t heard the worst: reception in the neighbourhood is terrible, leaving our heroine without her cell, text messaging, or Facebook! (What savagery!)

Naturally, this is the perfect opportunity for a friendly getaway in a remote corner of the country! A fistful of eccentric guests come together on schedule to have a bit of a party. These guests include Mlle. Rose Lestrange, a medium of some repute. She claims that a session in the murder room will give her the name of the serial killer—and wouldn’t you know it, a bunch of the guests are connected with these deaths! So Mlle. Lestrange is locked in at the top of the tower. The window is barred shut, the door is locked, and then multiple wax seals are created, imprinted spontaneously by the guests with whatever they may have on hand.

But two hours later, when the door is opened, Mlle. Lestrange is lying on the ground, dead, the room in disarray. She has been strangled to death—yet the wax seals are intact! Obviously the killer had to be in the room, but how did he vanish without a trace?

I’m still merely 18 years old, so I consider myself the best possible expert for judging a young adult novel. Of late, YA novels have steadily dropped off in quality (dare I mention Twilight?). Personally, I can only see in the wildly-popular The Hunger Games a clone of the classic Arnold Schwarzenegger film The Running Man, but with teenage angst thrown in. Spiral is decently written, and teenage angst takes a back seat to the plot. There’s some neat imagery here as well—the description of the murderer’s face at the finale, for instance, and the scene on the spiral staircase from Walt Disney’s Sleeping Beauty is referenced as well—with the ominous green glow drawing the princess to her inevitable doom... That’s more or less the effect Halter seems to have been aiming for, and he succeeds decently, though I do think some of his other books are more atmospheric. The teenage characters are the detectives and they do a decent job—they’re allowed to have brains, which is nice. But—and this is a big one—why do they treat their parents like garbage? Quentin is particularly bad in this respect—he has no respect whatsoever for his mother in particular, and she’s a bloomin’ saint! I know many teenagers have rough relationships with their parents, but some of the stunts Quentin pulls would have many parents dialling 9-1-1. Mum is content to smile and wave her finger at her darling, warning that Dad might hear about it this time. This is why it was hard for me to empathise with Quentin as a character, and I didn’t particularly care for his teenage angst over whether or not Mélanie still loves him when he doesn’t get a phone call.

But the plot more than makes up for this. The locked-room trick is actually very good— although be warned that the solution proposed before the dénouement is practically insulting to anyone with an IQ higher than that of a Ritz cracker— the victim would have had to have a brain the size of a peanut to make the murder possible in such a way. This is unfortunate, because it leaves you hunting for the real solution while the characters are running around trying to prove a fake one, and the whodunit part of that real solution thus becomes obvious. But nonetheless, the trip to get to the solution proves to be worthwhile—the plot is deliciously complex with all sorts of twist and double-twists, alibis, and revelations. It’s quite fun. 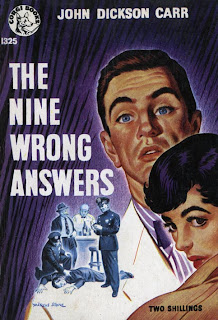 But the book seems to me a success in introducing young adults to the world of mysteries. We have many references to masters of mystery such as Agatha Christie, John Dickson Carr, and Gaston Leroux. One of the guests is a Professor Bourgeois, and I think he may have been inspired by Vincent Bourgeois, a friend of Paul Halter’s and a specialist in locked-room mysteries, as well as a co-author of Chambres closes crimes impossibles (Locked Rooms Impossible Crimes). There are some moments where Halter is winking directly at the reader—for instance, when we find out that a friend of Bourgeois is a mystery writer, another character expresses horror that he may one day be written as a caricature into one of those awful thrillers. These moments are the most fun to spot in the book and really make the reading worthwhile—though I think some of these references, such as one to Bob Morane, are references that a French reader will pick up far easier than I did!

Overall, I’m glad I read Spiral. It’s a solid new book from Halter and there are points of interest as an attempt by the author to do something new. It’s no masterpiece—the teenage characters can be real ratbags towards their parents, and a false solution we spend some time on is positively outlandish—but it’s an enjoyable read nonetheless. It isn’t particularly challenging to the seasoned mystery reader, but I think it is just fine as an introduction to the world of mystery for young adults.