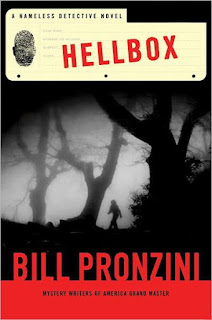 Hellbox is the newest novel in the Nameless Detective series of mysteries written by Bill Pronzini. It was published earlier in 2012 but I’ve only just gotten around to reading it. And the book is a bit of a departure for the series, largely doing away with the format of the more recent novels. For starters, this is more of a thriller than a mystery. Not only that, instead of getting two or three cases/storylines, we got only one and we focus on this one, which means that the focus is largely on Pronzini’s Nameless Detective and his wife Kerry. Jake Runyon joins the storyline about halfway through and Tamara makes what amounts to a cameo appearance. In addition, the novel makes many references to a previous entry in the series, Shackles, with which it bears some similarities.

Nameless and Kerry are in the Sierra foothills looking for a second home, and they absolutely love Green Valley, the area in which they have found an excellent potential home. It seems like a perfect vacation… that is, until Kerry disappears. She has been abducted by the psychotic Pete Balfour, a man with a grudge against the entire world. He finally decided to give into his psychotic tendencies and rigged a man’s house to blow up “accidentally”, when Kerry stumbled over him. As a result, she gets kidnapped and imprisoned by Balfour, who then decides he might as well extend his revenge to all of Green Valley… 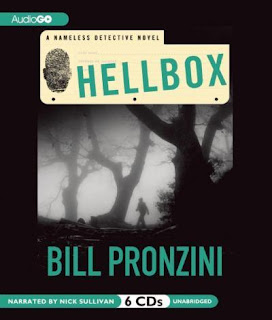 Kerry attempts to make her way out of the “hellbox” in which she is imprisoned, but it’s no easy feat, being guarded by a mean-looking, possibly carnivorous, dog. Not only that, she is bound and the doors are locked, with nothing sharp around with which she can free herself or pick the lock. It’s a maddening scenario for anyone, let alone a character we’ve come to know and love over the course of the series.

Balfour makes for a very disturbing villain. And yes, he does have what I’ve come to think of as “psycho monologues”—where our deranged psycho for the evening gives monologues from his POV to let you know what a tortured psyche he has (the poor widdwe dawling!). I generally dislike these monologues, but Pronzini is a master storyteller and these monologues work very, very well. Balfour is unquestionably psychotic, but he has a very twisted reason for being psychotic—a reason that no sane man would find adequate, but which makes some sort of peculiar sense for Balfour. A mystery element of sorts is introduced when Balfour, in his monologues, decides to take revenge on all of Green Valley, but the nature of the revenge is not revealed to you. However, you can sort-of figure out the general gist of the revenge in question just by the scope it entails.

Hellbox is an interesting book. It’s quite good and makes for a very quick, interesting read. But it does bear some similarities to Shackles, one of the best Nameless Detective novels. It’s not nearly as good—being merely “terrific” instead of flat-out “brilliant”—but it’s still a worthwhile read and one of the better books I’ve read in 2012. It brings the focus back to Nameless for most of the novel, and I think we can agree that that’s basically a good thing. It also shows just how similar Jake Runyon is to Nameless. First-person narration is still reserved for Nameless only—and incidentally he’s called Bill many, many times in this book, to the point where calling him Nameless seems unnecessary—but Runyon is a terrific creation who, you feel, would be able to take over the reins of the detective agency if Nameless were to retire. If you like this series already, Hellbox is another solid entry, but I wouldn’t recommend it as an introduction to the Nameless Detective series.

Note: This review is the last mystery review that will be posted in 2012, for the excellent reason that I won't have time to read another full novel in the busy time ahead of me. However, like last year, there will be lists coming up.