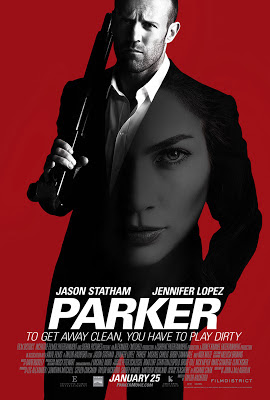 Anyone who follows my blog regularly knows that I am a very big fan of the late, great Donald E. Westlake. I enjoy his work when he is writing a comic crime caper, and I equally enjoy it when he writes a dark, gritty tale. Parker is one of his most famous characters. Writing under the name “Richard Stark”, Westlake created an utterly amoral thief named Parker, who doesn’t kill people not out of any moral notions, but because it makes for a nastier legal mess. Casual murder is not his style, but if he has to do it, he will kill anyone to get his way. His actions are dictated purely by logic, not by emotions of any sort. And somehow, Donald E. Westlake took this utterly amoral figure and made him into a fascinating anti-hero.

We’ve seen Parker on screen several times. Point Blank is still perhaps the greatest adaptation of a Parker novel ever filmed, starring Lee Marvin as “Walker”. Payback starring Mel Gibson as “Porter” was also pretty good, although the (shorter) director’s cut is far better than the original theatrical version. One thing has been common in every adaptation – nobody has been allowed to use the name “Parker”. And so when I found out about the new film Parker, I got excited. Someone was finally allowed to use Parker’s name??? What sort of sorcery was this? And then I found out the movie was due to be released in October before being pushed back to January, which isn’t always a good sign. So what is this movie? A gem to be embraced, or a crappy movie that’s being flushed out with the rest of the trash this time of year?


Well, it certainly isn’t the latter. Parker has some flaws but overall it’s a terrific adaptation that left me very happy as a fan of the character. The story is a simple one but a good one. Parker is a thief, and on his latest score he is double-crossed by his partners when he refuses to reinvest his share of the loot for a second heist. They leave him for dead at the side of the road, but like all those horror movies you’re supposed to make sure the monster is dead before driving away. Parker comes to in a hospital and decides he’s coming after the men who betrayed him. And he isn’t coming back just for his 200 grand. He’s taking it all.

Jason Statham does a good job of playing a morally corrupt man – not as amoral as the character of Westlake’s books, but few audiences would want to see that anyways so this change is understandable and not too drastically different from the original character. I like Statham, and he brings his personality to this flick. His sardonic sense of humour is the same kind of humour that we get from Parker. When asked how he can sleep at night, he replies with a straight voice “I don’t drink coffee after seven.”

Statham wouldn’t be my first casting choice because of his accent – Parker is, after all, a very American character. But he does a good job in the role, and I’m glad that the accent is never explained. We don’t get a sob story about Parker’s abusive past growing up in Liverpool or anything like that. We find out very little about Parker’s past, and I liked this a lot. Parker isn’t entirely amoral, and shows some trace of emotion from time to time, but he tries to suppress it if any chinks show in his armour, and that isn’t too bad of a change, character-wise. When he kills someone near the end, for instance, he scolds him for messing up his part of the original heist before doing the deed, which to me rang true to Parker.

But then we get Parker’s sort-of love interest, Jennifer Lopez. I’m sorry, I just don’t find her a credible actress. The character she plays is fascinating – a real estate agent who is tired of playing by the rich people’s rules, showing them around and laughing at their jokes and avoiding sexual passes while trying to make a sale and earn her commission, all while being stuck in a dead-end job and living with her mother. But Lopez doesn’t pass this off. She’s a bit whining and annoying, and it doesn’t help that we only see three or four other employees. Of these, I only remember two. One is your classic hot-chick-who’s-also-a-bitch. The other is nerdy (because she wears glasses) and not particularly attractive but she’s nice to J-Lo. I forget what Lopez’s character is supposed to be called, but I never thought to myself anything other than “Oh, that’s Jennifer Lopez pretending to be a real estate agent”. It doesn’t help that Lopez almost ruins everything in the finale by showing up at the worst possible moment, and thanks to her acting it’s so obvious that she’s about to almost-ruin-everything that it nearly ruins the moment. But hey, you get a calculatingly-titillating moment where Parker forces her to strip… which I think was supposed to be erotic, but it really wasn’t. (And although we get a Gratuitous Tits scene, it ain’t Lopez showing ‘em and they’re relatively subtle, so it’s not as bad as it could’ve been.)

But if we were to remove Jennifer Lopez from the equation, I’d have very few complaints about Parker. Director Taylor Hackford has proven that he can helm excellent films before. He’s directed Ray, The Devil’s Advocate, and Dolores Clairborne, all excellent movies. He brings a level-headed direction style to Parker. Although we got some occasional shaky-cam, nobody will suffer a seizure and it’s easy to tell what is going on on-screen. There’s plenty of onscreen violence, and it can be particularly brutal at times, such as when you see a knife slice through somebody’s hand and come out on the other side. (Not a film for the easily-squeamish.) Twice, Parker’s interactions leave him a bloody mess: he isn’t an unstoppable Luke Cage-like superhero. I liked this element of the movie a lot.

The music is terrific… when accompanying the film. It’s a style of music that I would never listen to on my off-time, but it’s energetic and helps drive the action scenes without overshadowing them, and that’s precisely what an action movie score is supposed to do.

Supporting performances are generally speaking excellent, with one minor complaint. Nick Nolte shows up, but his voice is so soft yet throaty that I wish he’d spoken a little louder or made it less throaty. Apart from that we get some really good performances. Michael Chiklis is particularly good as the mastermind who engineers the double-cross.

Parker is not a perfect film, but it’s plenty of fun and it’s about as good an adaptation as we could expect from modern-day Hollywood, which really likes tearing characters apart. (Heard anything on Jennifer Garner  as a sexy young American Miss Marple in a Disney remake recently?) That hasn't happened to Parker. Thank God! I haven’t read the novel Flashfire on which it is based, so I cannot compare it to the source material, but the story has enough cleverness to identify it as a Donald E. Westlake story. (The film even concludes with a dedication to Westlake’s memory, which was very nice to see.) The action scenes are terrific, such as the opening heist or Parker’s fight with a professional assassin. Jason Statham does a good job in the title role, and the changes to Parker's character are not too drastic -- not a bad batting average for Hollywood. Jennifer Lopez is her usual annoying self. We get some good supporting performances. Overall, it’s a good movie; I liked it and would see it again.