All Aboard the Cliché Train!!! 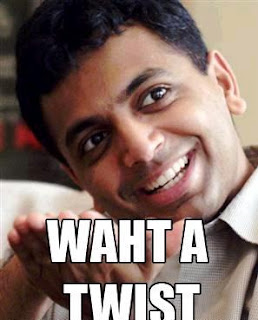 There’s a certain type of mystery plot out there that is really starting to get on my nerves. The plot isn’t confined to a single sub-genre. The book can be set in a charming English village where an elderly lady plays the role of amateur sleuth. It can just as easily be a tough-as-nails hardboiled story about a tough wise-cracking PI. But for some reason, many authors think it’s a clever idea to use the following twist ending: the killer is gay.

What does the author of such a tale expect me to do? Throw my hands in the air and scream “Oh, my God!!! A gay person!!! I thought they were only mythical creatures that hid in forests, picked berries while the moon was full, and secretly stole pens whenever you needed them!” This twist ending has long outgrown its shock value… and its welcome. And the ending has introduced a brand-new set of clichés to the genre, clichés I’m sick of seeing.

See, the killer might be gay, but he did it all for love! Sure, he  might have killed seventeen people, but the real criminal here is society, which just wouldn’t let Bob and Harry shag each other! Now, good reader, go stand in a corner and meditate on how you are every bit as responsible for these heinous crimes as Bob and Harry were! 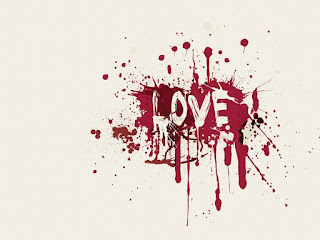 Every once in a while, an author decides to put a spin on this motive. A gay killer will commit the crime out of another motive—say greed—but love is still there as a motive, and I think the author expects this to redeem the murderer’s actions. Sure, Bob might be a greedy little asshole, but once he got the money, he and Harry would have moved to the French Riviera (everyone knows the French are a-okay with homosexuality) and lived a happy life planting roses and walking along the beach.

I’m annoyed by this. Not because I’m a raging homophobe, but because we’ve created a brand-new stereotype, the Misunderstood Homosexual. In our fiction, whenever these people turn out to be criminals, society is almost inevitably to blame. I have always hated when an author corners me and delivers a banal homily about how my ignorance has helped to create the fictional situation that resulted in seven murders via gunshot, three stabbings, two strangulations, one-and-a-half poisonings, and one rape scene. And homosexual characters have become the latest fads for delivering us this kind of “crime novel,” which takes itself too seriously because it’s Real Literature and it’s telling us the straight dope about life, dawg! (Kids still say ‘dawg’, right? You dig me, daddy-o?)

One of my biggest pet peeves is how, in a historical mystery, the author will often take some time out for a lecture on civil rights. And so Sister Luna of the Convent of the Heart of Our Lady of the Perpetual Sorrow, back in 13th century Italy, will suddenly rise at the dinner table and lecture Father Claudio about how cruel society is to women, to black people, to Jews, and to homosexuals and how she certainly hopes that one day people will learn better and will treat minorities with respect. Now I’m all for minorities having equal rights, but I’m afraid that the real-life Sister Luna would have laughed at such a speech. Such attitudes didn’t exist back then, and these segments always feel like the author is trying to protect the poor reader’s sensibilities. “Now I know you learned back in Grade 1 that girls can do everything boys can do, but once upon a time people didn’t think so. Fortunately, in my story everyone except the crabby old priest (who’ll be murdered in Chapter 17 anyway) is totally cool over minorities and totally treat them as equals.” This is particularly maddening when the same author tries to reproduce historical accuracy in all other details.

The long and short of it is this: I’d like to see some more diversity when it comes to portraying minorities, and maybe see some more evil examples. By this, I don’t mean I’d like to see a return to the “Yellow Peril” novels complete with stereotypes that would offend everyone from the NAACP to the Italian Anti-Defamation League. But I would like to see more diversity among such characters, rather than the homogenized nonsense we usually get. It’d make reading crime fiction a bit more interesting. Nowadays, when I try picking up “serious” crime fiction, most of the time I simply cannot get through it. It all feels the same: slightly patronizing, slightly preachy, very arrogant about its artistic merit, and ultimately quite forgettable.

But I admit this is a gross generalization on my part. I do not try to get a comprehensive picture of the new books that are published every year. I just cherry-pick book lists and read stuff that interests me. It could be that I just have atrocious luck trying to read these very bad books and thinking that it represents the genre’s status as a whole. But I don’t think I’m exaggerating too much. Critics go absolutely mad over these novels, and the mystery genre is one that has been taking itself too seriously for far too long. Desperate to get serious critical attention, the genre panders to the tastes of academia. As a result, genre studies are almost exclusively (a) inquiries into hardboiled stuff that is sure to put down Agatha Christie and her ilk as inferior, or (b) the importance of gender throughout crime fiction. (I know there is other stuff that is written on the subject, but I work at a university library. We have shelves of books about noir and hardboiled and women, but almost nothing on Agatha Christie's plotting ability. In fact, the only such book I’ve ever spotted on the shelf was Robert Barnard’s A Talent to Deceive.)

Let me give you some examples of what I mean, the stuff I’d like to see more often. Take the debut novel of William L. DeAndrea, Killed in the Ratings. In that book, we get two prominent Jewish characters. One of them is a Jewish gangster who fits a demeaning Jewish stereotype, right down to (still!) living at home with his mother. The other is a Jewish police officer named Rivetz, who nearly compromises the entire investigation in his determination to slam the handcuffs on the gangster. He complains that just because one man happens to fit into a stereotype, it gives people an excuse to condemn everyone belonging to that group on the same ground. 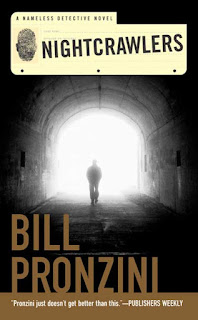 Or how about Bill Pronzini’s Nightcrawlers? Several plotlines mingle through the book, but by far the strongest plotline involves a series of gay bashings that become more and more violent. One of the Nameless Detective’s partners, Jake Runyon, has a gay son whose boyfriend becomes a victim of these criminals. So Jake begins to search for the men who are responsible, and in his search he comes across all sorts of gay people. Some are in loving relationships. Some are alone. Some are in poisonous relationships where a dominant party controls the weaker party entirely. Either way, being gay does not confine you to a single personality type. The characters are complex and do not fit a universal cookie-cutter mold, and the author does not take the opportunity to patronizingly lecture his readers.

But what about groups that are portrayed as evil already? For instance, it’s totally cool to show religious people are complete nutters. I mean, anyone who wants to dress up in a toga and do some razzle-dazzle with a piece of bread has got to be delusional, right? That’s what some authors seem to think – like a certain Canadian author who wrote that-book-that-must-not-be-named. She seemed convinced that anyone who becomes a priest must be running away from the world, which has injured him in some way, and that he didn’t choose the religious life, this is just his coping mechanism. Also all priests are potential pedophiles and raging homophobes. (It wouldn’t surprise me if they spend their spare time strangling alley cats and throwing deadly scorpions at the poor children.) In fiction, it sure seems that all priests are pedophiles and all nuns are evil ruler-wielding maniacs who enjoy beating kids. This is because they’re all evil, right? From time to time, an author portrays a religious person positively (usually because he’s the detective), but he's far overwhelmed by the negative examples. And even when a religious person is portrayed positively, he or she is usually a rebellious sort who disagrees with their church on [select any combination of the following: abortion, gay marriage, divorce, women priests, celibacy among the clergy]. Where have the good priests like Father Brown gone to hide? In the annals of out-of-print hell, I suspect – go on, search the Kindle store for Father Bredder. I dare you. Even the good Father Brown got a terribly mediocre TV series to represent him. He’s just not evil or rebellious enough. Evil priests are all the rage, dude. (We’re so in touch with the 18-29 demographic.) 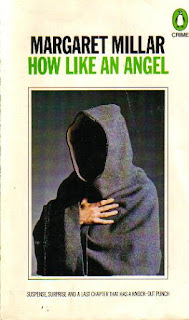 I suppose I’d like to see the Margaret Millar treatment a bit more often, by which I mean her portrayal of a religious cult in How Like an Angel. She creates a fictional cult and some of its rules are completely nuts. The main detective, Joe Quinn, plainly shows his skepticism and throws around some one-liners and insults the cult and some of its members. But Millar portrays the group with sympathy – she doesn’t share their beliefs, but she shows that they believe all this nonsense, and that belief is sincere. Even the cult’s “Master” seems sincere, instead of being your typical sleazebag who’s only looking to bilk people out of their money. This makes the novel far more interesting than it would have been had the Master been some cartoonishly evil fraudster and if all the cult members had been easily-duped idiots who blindly obey their Master. They’re allowed to think, feel, reason—yes, even doubt! It’s refreshing to see such a — well, human — portrayal of religious people.

So that’s my rant, and take it for what it is, a rant. Maybe I’m wrong and all these stereotypes I’ve mentioned are subverted in major book series that everyone has read but me. But in the reading that I have done, these trends seem pretty pronounced and they prevent me from dipping my toes further into the waters of brand-new books. These clichés are simply ones that annoy me and that I would like to have disappear for good.