Tales from the Crypt 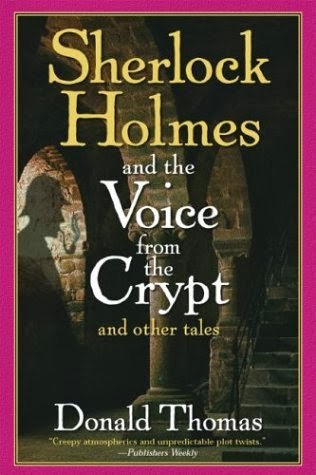 I had the great pleasure last year to read Donald Thomas’ The Secret Cases of Sherlock Holmes, a book which reimagined several famous murder cases as though they were Sherlockian adventures. My very favourite of the lot was an ingenious retelling of the adventure of Charles Augustus Milverton, revealing that it was a fictionalised account of the death of the notorious blackmailer Charles Augustus Howell, and turning it into a prequel to The Final Problem. It became one of my new favourite Sherlockian pastiches.

Naturally, I couldn’t pass up the chance to read more from this series, so I went with Sherlock Holmes and the Voice from the Crypt. It’s another collection of Sherlockian pastiches. There are six of them in all, but one of them is quite short, and the other (the titular story) is probably novella-length. As with the first book, Sherlock Holmes is called in to investigate famous mysteries, and helps the authorities behind-the-scenes. Naturally, Holmes doesn’t take any of the credit.

The Two ‘Failures’ of Sherlock Holmes
This is an odd story indeed. First of all, it’s so short. Second of all, it is really two stories in one. And the famous trials retold in this story are of such a high profile that it seems odd that Thomas chose to compress them into one story instead of giving each a full-length retelling. First, Dr. Watson tells us about the Crippen case, and how Sherlock Holmes was asked by the defense to look into the matter. Yet despite Holmes’ advice, Crippen himself refused to cooperate and as a result was sent to the gallows. Next, we are told of the role Holmes played in Oscar Wilde’s infamous trial, and how his advice was once again ignored. Overall, it’s an OK story, but not one of my favourites.

The Case of the Racing Certainty
This story predates the famous encounter between Sherlock Holmes and Dr. Watson, and tells of an ingenious attempted swindle. The story begins with Holmes being hired to investigate the claims of a certain “Major Montgomery”, a man so lucky that he’s been banned from placing bets in England. Luckily, he can still place bets through other people, and he’s corresponded with a generous French backer, asking for certain sums to be betted on certain horses. His remarkable streak of luck continues, until finally his backer begs to also be allowed to place a bet of her own on the races…

The story is ingenious, like a Victorian version of The Sting. Holmes meets Lestrade for the first time and enlists his aid to uncover the swindlers, who seem to have set their sights on more than one target. It’s a nicely worked plot and adds to the Canon.

The Case of the Naked Bicyclists
This is another strange adventure, in which Holmes is asked to investigate the strange activities of a certain Captain Dougal. A neighbour of his has observed that the Captain has a bizarre habit of going outside with a group of nude young women, and having them ride their bicycles in a circle performing tricks. He is standing in the middle of the group, and the neighbour is able to observe that he’s enjoying the whole thing very much (if you know what I mean).

This is a good story. It’s a retelling of the Moat Farm Murders, which might not be as prolific a case as the Crippen case, but which caused quite a stir in its day. While it’s a good story, I must say it isn’t one of my favourites. I can’t quite put my finger on why, though.

The Case of the Sporting Major
A man named Alfred John Monson is accused of murder. It seems that Major Monson and a friend of his, Edward Scott, were in the company of one Cecil Hambrough, a pupil of Monson’s, when a shot was fired. When witnesses arrived on the scene, Hambrough was dead; curiously, he’d taken out a life insurance policy six days before, and that policy stands to benefit the major considerably. The forensic evidence against Monson is very black, and it seems inevitable that he will have an appointment with the hangman in the near future…

Until Sherlock Holmes steps in. Holmes analyzes the scene of the crime and comes to the conclusion that Monson is of course innocent, and proves his case with an analysis worthy of John Rhode’s Dr. Priestley. This is a scientific murder case with a fairly technical solution, but it’s very neatly worked out. It might not be to everyone’s taste, but I liked it very much personally.

The Case of the Hygienic Husband
If you’ve read novels from the Golden Age of Detective Fiction, odds are you’ve seen the name of an infamous killer pop up, often when a husband is suspected of killing his wife. That man’s name is George Joseph Smith, “The Brides in the Bath Killer”. In this story, that same Smith crosses swords with Sherlock Holmes. And it’s every bit as good as it sounds. Holmes not only does a good job reconstructing the crime, there’s also a marvellous bit of sleight-of-hand from the killer involving wordplay (though I confess I do not know if this wordplay took place in real life as well). Smith is one of those all-time famous killers, and this story is one of my favourites, showing Holmes at his most psychotic when he re-enacts the crime in front of witnesses. But just as importantly, this is a bit of a warm-up. Sherlock Holmes has tackled George Joseph Smith in this story. In his next story, he’ll duel with another famous killer.

The Case of the Talking Corpse
Imagine, if you will, a series of murders. Young women of shady reputations are being targeted, and they are dropping like flies. Paranoia seizes London, and nobody can stop talking about the killer, and who could be his next victim. You may have guessed that I’m describing the Jack the Ripper murders, but no, I’m actually talking of the Lambeth Poisoner. It isn’t quite as catchy a name, but the Lambeth Poisoner was eventually caught and revealed to be Dr. Thomas Neill Cream.

This is a full-length adventure, longer than any other story in this collection and probably well into novella-length territory. This is also one of the highlights of Donald Thomas’ Sherlockian pastiches. It’s a complex plot with a killer who seems like an absolute madman, and it’s up to Sherlock Holmes to corner him and put him away. But Sherlock seems almost uninterested at times, insisting that a “voice from the crypt” will guide them to the murderer…

The wonderful part of this story is how many of these plot twists seem like complete nonsense, like something that would have to be invented for the purposes of fiction. But no, Dr. Cream really was this insane, and that’s what eventually resulted in his capture.

The ingenious idea behind choosing Dr. Cream as Holmes’ opponent is that his murders recreate the paranoia of the Jack the Ripper murders without creating yet another Jack the Ripper vs. Sherlock Holmes story. The market is saturated with those stories, and Dr. Cream’s story is much less well-known, even though his crimes were just as deranged as his anonymous counterpart’s. It makes for terrific reading, and is one of my new favourite Sherlockian pastiches. I can highly recommend it.

Overall, I enjoyed The Voice from the Crypt. It’s a solid collection of pastiches, and it ends with two absolute gems to leave you on a high note. If you’re a fan of Sherlock, or interested in one of these murder cases, these are good stories to dive into.