A Twist of Time 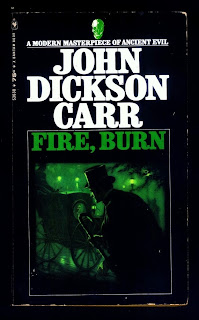 When Detective-Superintendent John Cheviot got into the twentieth-century taxi, nothing was amiss. “Scotland Yard,” he told the driver – meaning, of course, New Scotland Yard. He had no frisson of premonition, no encounter with a mysterious stranger… in short there was absolutely nothing to indicate anything unusual was about to occur. But when Cheviot got out of the taxi, he found himself at Old Scotland Yard… in the year 1829.

Cheviot finds himself part of Scotland Yard at its inception. The police are not seen as society’s protectors, but rather as a group of thugs with which high society needn’t bother. Apparently, everyone accepts Cheviot’s presence in 1829—perhaps he is re-enacting the historical role of an ancestor of his?—and it turns out that the original Cheviot was trying to join the newly-formed Scotland Yard.

Cheviot can bring his modern-day know-how and investigative techniques to the 19th century, which works to his favour when a woman dies in apparently impossible circumstances: in full view of three witnesses, a woman is shot dead. Yet the witnesses can vouch for each other, and apparently nobody else could have fired the fatal shot. How was it done? 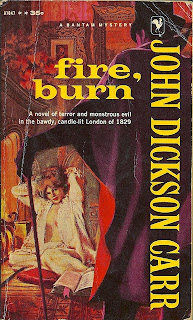 This is the plot of John Dickson Carr’s Fire, Burn! (1957). I like to occasionally treat myself to a Carr novel, and before reading this one, I counted 14 Carr titles left for me to read (not counting the ultra-rare-and-I-will-probably-never-lay-my-eyes-on Devil Kinsmere). After asking the Golden Age Facebook group for opinions, I settled on Fire, Burn! as my next read. I was not disappointed.

Fire, Burn! is an excellent historical mystery. The atmosphere is wonderful, one of adventure and mystery. Carr does a marvellous job recreating the London of 1829, and his endnotes (“Notes for the Curious”) inform readers about his sources, and how his story is based on fact wherever possible. There are one or two rather surprising facts that come out of these notes, and which ground some of the story’s more exotic elements (such as the solution to the impossible crime).

As a mystery, this book is good… I guess. Yet I cannot really praise it, because I was left with a feeling of anti-climax. Though I did not correctly guess the identity of the murderer (in my defense I wasn’t really trying), I was let down when his identity was revealed. The way the impossible crime was concocted simultaneously manages to be ingenious and disappointing. It’s not so much a shocking revelation as it is a moment of “Oh… wait, that’s it?” In some ways, it relies on the historical setting to mask the solution, which otherwise might be too obvious. 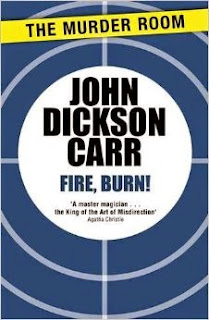 Why, then, did I refer to the book as an “excellent historical mystery” a couple of paragraphs ago? What saves this book from being a mediocre read is the historical atmosphere. By 1957, Carr’s age was beginning to catch up to him. Becoming disillusioned with the modern world and what passed as “progress” in it, Carr began to turn to historical fiction more and more often. In some ways, this book is an escape for Carr as well as for his reader. On that level, Carr succeeds wonderfully. The most common failing of historical mysteries is when the writer spends 130 pages showing off all the research that went into writing the book, adding nothing to the story in that time. (It is crucial, after all, to learn about the complexities of the tea trade in the Victorian Era!) Carr manages to be both succinct and evocative.

Furthermore, though not particularly impressive as a “fair-play” mystery, Fire, Burn! is a wonderful adventure, bringing in everything from romance to duelling. The plot merrily zips along, and I personally enjoyed the ride considerably. Fire, Burn! is not on the same level as The Bride of Newgate, The Devil in Velvet, or Fear is the Same (published under the Carter Dickson pseudonym), but it was entertaining reading, and quite frankly, that’s all I asked for.

Notes for the curious: By my count, I only have the following thirteen Carr books left to read:
13 at the Gallows
Captain Cut-Throat
Dark of the Moon
Deadly Hall
The Demoniacs
The Hungry Goblin
Most Secret
Papa La-Bas
Patrick Butler for the Defence
Scandal at High Chimneys
The Sleeping Sphinx
Speak of the Devil
The Witch of the Low-Tide