Whoever's Behind This Haunting Will Have a Long Chat With Mother Superior... 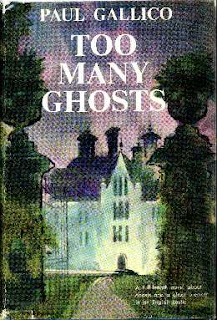 It is incredible what you can find during an afternoon at your local library. After my recent review of William DeAndrea’s Killed on the Ice, when I found myself at my library, I couldn’t resist looking at the shelf to see if there were more DeAndreas, even though I knew there weren’t (thanks to the magic of the Internet). When I started to walk away towards the door, something caught my eye, and I stopped at the next shelf. A hardcover book with an altogether too-familiar spine was sitting there on the shelf—it was a Black Dagger Crime edition of Too Many Ghosts, by Paul Gallico (best-known, perhaps, as the author of The Poseidon Adventure, which made for an unreasonably delightful movie).

I really like the way old Dell Mapback editions would start out, by telling you what the book would be about, listing the most intriguing-sounding things about the plot. I will try to do the same.


Too Many Ghosts is a Mystery about… a series of HAUNTINGS at Paradine Hall… an ICY hand GRABBING a girl’s throat… objects FLYING through the air UNAIDED… the dematerializing FIGURE of a nun… a HARP that plays by ITSELF in a locked ROOM…
And really, let’s be honest here: who wouldn’t want to read a mystery about a dematerializing nun?
Gallico never really hit it off with critics. They loved him for his story The Snow Goose (unread by me), but apart from that, he never really got anywhere with the critics. From what I can discern, Too Many Ghosts is his only entry into the mystery genre, and it’s a pretty damn good one at that. In just his first two chapters, Gallico introduces more impossible situations than some full-length novels ever get around to! He really complicates things for himself, but at the same time, there’s an uneasy feeling of “oh, is he going to just blame it all on trapdoors?”…
This novel is competently written. The first impossible manifestation of the supernatural is a pretty creepy scenario, but Gallico doesn’t really make it sound creepy, although it seems like he’s trying. He has far more success at a very creepy scene at a dinner table, where a chair suddenly begins to move by its own will, all the candles suddenly go out, and the figure of a nun materializes out of nowhere. It’s well-done, but Gallico never really makes this a spooky haunted-house story. He has fun with the premise and turns it into more of a supernatural-mystery-comedy. 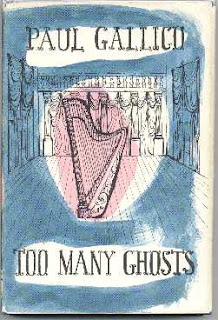 The story has got excellent elements. Unfortunately, Gallico never tells a good story to connect the apparition of the nun with the harp that plays by itself. You’d think that it would make for a cool, creepy story! But you’d be wrong. Gallico blazes through it so fast in half a page, that if you blinked, you would miss it. If I wrote it all down, you’d think I was summarizing it. I would have loved to see his story written by John Dickson Carr, with a touch of blood and thunder, perhaps some of the grotesque or bizarre, and maybe going more into detail about the nun’s appearances in the past. There’s actually a really good ominous rhyme that could’ve been used to conclude such a story: “When the harp strings quiver and you hear the ghostly air, let the Paradines beware! Let the Paradines beware!”
Gallico tells a satisfying story. Not all of his explanations are perfect— in particular, he does not play fair with the first ghost he debunks. “A-ha!” his detective, Alexander Hero, suddenly shouts to the reader. “Fifty pages ago I visited the office of Messrs. Smith, Wesson, and Smith, and I never told you what I discovered there! Well, it may interest you to know that the windows of Dame Blueberry's room were made entirely out of sugar!!! Doesn’t that explain the first ghost?” All right, I’m exaggerating, it was nothing nearly as silly and the explanation itself is quite satisfying, but Hero conveniently waits quite a few pages before telling the reader just what he learned. Some of his explanations are somewhat lacking, but generally, he explains his situations well.
The big cherry on top of this dessert, however, is the impossible situation Gallico creates with the harp that plays by itself. This is a really good situation: the door is locked, and when it is finally opened, there is nobody in the room, but the strings of the harp are still vibrating… The solution is actually pretty damn good, and is fair. It also manages to show some originality.
It must also be mentioned that Gallico is never mean-spirited: he doesn’t take sides and doesn’t condemn anyone for their beliefs. For instance, when Alexander Hero first arrives on scene, the local vicar is all set to perform an exorcism. Instead of launching into a tirade over how the priest knows nothing, Hero shows respect towards him and does not object to the ceremony, even though he’d prefer to have made a preliminary examination.
Hero is actually a very fun character. He treats everyone nicely, including the ugly child of a nasty bully of a politician and his neurotic wife. When he makes someone break down and cry, he feels awful. But above all, he wants to believe in the supernatural and paranormal, but as he himself says, “up to now, ghosts have been noticeably shy in my presence.”
Overall, this isn’t the best mystery ever written, but it’s certainly a fun one, and far from the worst. It’s fairly original and contains one good, interesting variation on the locked-room problem. Approach it more as a light-hearted ghost story, and you’ll probably walk away entertained. Once again, a post-Golden Age author (this was published in 1961) has proven to me that imagination did not completely die out with the Golden Age.