The Sound of the Basketballs

Written by Patrick
My casebook also records the name of the American barque John D. Carr, whose disappearance was a fortnight’s sensation, until Homes was able to accurately predict its exact location—in drydock—from a simple mathematical calculation and the word of the steersman that he had lashed the wheel before going over the side—a case I have already chronicled in The Adventure of the Locked Rhumb.
—Dr. Watney, The Adventure of the Missing Cheyne-Stroke
“I fear some grave misfortune may have befallen Sir Lionel Train.”
Homes nodded in instant understanding. “Who?” he inquired.
“Sir Lionel Train, head of Q6-JB45-VX-2DD-T3, the most secret of our secret services. Other than the Yard and Special Services, no one has ever heard of the man.”
“Ah! That Sir Lionel Train!” Homes said, and nodded.
—     Criscroft and Schlock Homes, The Adventure of the Great Train Robbery 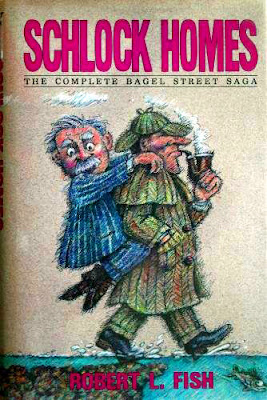 I discovered my love of mysteries through Sir Arthur Conan Doyle’s Sherlock Holmes tales. So it’s hardly a surprise that, when I tired of reading juvenile mysteries, I turned to various pastiches to try recapturing the magic of Holmes. During that period, I encountered many parodies among the Holmes pastiches. I’ve seen Holmes portrayed as a complete buffoon, Watson the genius of the duo, Holmes as a figment of Watson’s imagination, and so forth. But over the last two days, I’ve had the intense pleasure of reading Schlock Homes: The Complete Bagel Street Saga, which is single-handedly the wittiest, funniest, most wildly entertaining, and (to put it simply) the best collection of Sherlock Holmes parodies I’ve ever read, collecting all the stories of Schlock Holmes, written between 1960 and 1981.
Schlock Holmes was a creation of Robert L. Fish, and I was inspired to find this book after reading Norma Schier’s brilliant The Anagram Detectives. Her final tale, The Boing! Ritual, is a riff on Schlock Holmes, who himself is a parody of Sherlock Holmes. Homes and his assistant, Dr. Watney, are pulled through some of the most astounding adventures, brought to them at their headquarters in 221B Bagel Street. On occasion, Homes’ brother Criscroft comes by to bring an interesting problem to his attention. (Invariably, however, there is something at Criscroft’s club preventing him from investigating himself.) Throughout the collection, Homes and Watney come across their archenemy, Professor Marty (whom they call—with good reason—The Butcher), several times.
This collection of stories is flat-out perfect. Every story has moments of brilliant humour that made me laugh out loud, often till I was weak in the knees. The parodies are just sublime. I’m going to have to alter my usual formula for reviewing short story collections yet again: to go through each of the stories and praise each would just get repetitive, and I’d have to give away the jokes. But I will go ahead and reveal my favourites: although I sincerely believe each story is perfect, these are mind-blowingly sublime in a way that renders me speechless. 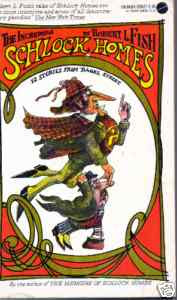 The Adventure of the Printer’s Inc.
The story ends with a brilliant deduction by Homes, which although it is entirely wrong is perfectly correct. Homes and Watney run into Professor Marty for the first time, and in a brilliant scene parodying A Scandal in Bohemia, stop the Professor from committing a crime, while completely ignoring his perpetration of a far bigger crime! And yet, through a series of misinterpreted sentences, the professor is forced to stop his activities nonetheless! Brilliant!!!
The Adventure of the Spectacled Band
Fish shows his sublime talents at parody often—through something as simple as a minor misspelling, one of Holmes’ original cases turns into a very different Homes case. This is a prime example, when Homes investigates the mysterious activities of a musical group calling themselves “Murphey’s Myopic Mountaineers”.
The Adventure of the Final Problem
Another adventure involving the villainous Professor Marty; a brilliant parody of The Final Problem and it also throws in a sublime pun at the end referring to another Holmes story. You’d think that having Schlock Homes fall into a precipice would be a tragic moment, wouldn’t you? Well… See for yourself what Fish makes of it.
The Adventure of the Disappearance of Whistler’s Mother
Fish uses his cunning at its best here, combining misspelled words, puns, and misunderstandings to make for a story so brilliant I won’t describe the hijinks in detail. Suffice to say it involves Monsieur C. Septembre Duping of Paris, who comes to Holmes for help! And let’s not omit this brilliant tip of the hat to Edgar Allan Poe:
“You may recall that back in ’41 I was able to be of some slight assistance to him in that sinister business of the simian with the inclination for strangling women and stuffing them up chimneys.”
“Of course,” I replied warmly, my eyes fixed upon our famous visitor with admiration. “As I recall, I even recorded the case in my notes as The Adventure of the Monk’s Habit.”
Words fail me. I just can’t describe how brilliant every word of that small section is. Perfect!
The Adventure of the Odd Lotteries
The Police Commissioner in Scotland comes to consult Homes over the strange behaviour of his assistant, the famous cricketer Mr. A. J. Lotteries. Coincidentally, there has been a series of burglaries in the area… Again, a brilliant reference to another author’s work, and an unbelievably funny story at that, as Holmes deduces just why Mr. Lotteries dresses from head to foot in black, complete with gloves and a mask.
The Adventure of the Short Fuse
Homes is on the case, as a young man comes to tell him about his lover. She is married to the beastly Sir Alex Northerland, a man so beastly he allows his wife to do what she pleases, doesn’t ask her where she’s been when she returns, and doesn’t limit her income in any way! The swine! Homes and Watney are on the case—and this story has possibly my favourite humorous moment in the entire book, relying heavily on punctuation to achieve its effect. 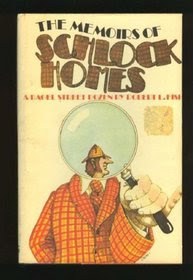 Also worth mentioning are The Adventure of the Belles Letters and The Adventure of the Dog in the Knight, variations on the same idea where the culprit’s identity should be obvious, and yet Homes manages, without the shadow of a doubt, to exonerate them from a suspicion that never existed. Bravo! Also, don’t miss The Adventure of the Counterfeit Sovereign, where Homes and Watney have to deal with the second most dangerous man in England: Colonel Moron!!!  And last, but far from least, is The Adventure of the Great Train Robbery, with a story so grand, I couldn’t live with myself if I spoiled it for you.
How do I sum up this collection? Simply put, it’s brilliant—one of the best books I’ve ever read, period. I can only quote Anthony Boucher: “These Fish stories are the best in all the mock-Holmesian literature.” And my, how true! Anyone can write a story in which Holmes is a total moron, and it’s not much harder to write one where Watson is the genius. But Fish does something better than that—Homes and Watney act precisely as Holmes and Watson, and although they get their facts quite wrong, they march on in the name of justice. The deductions are all brilliant, based on nothing but the soundest logic—and yet, they’re all wrong. Nearly every story ends with Homes and Watney reading of some mysterious crime, inadvertently caused by themselves. The account of the crime so shocks Homes that he asks Watney to send a telegram (if you please) to the authorities offering his services. Homes does everything from making Northumberland disappear to disrupting the postal service!
Fish’s humour is also brilliant— it’s a perfect batting average. All he needs to do is change a single letter to make a brilliant Holmes case into an equally brilliant, but quite different, Homes case. He uses perfect puns, sparkling slipups in spelling, and matchless misunderstanding to create a truly unique parody of Holmes. He also manages to fit in several sublime references to other authors and detectives, and it’s just a delightful treat.
And this world is just fascinating. Robert L. Fish never tells you the years the stories take place—although you’d think ’63 refers to 1863, you could be quite mistaken. At times, the stories can only be taking place in modern day, and yet this is a modern day that exists with carriages being driven by horses over rough cobblestones, with railway timetables being consulted frequently, with telegrams being the fastest method of communication, and with gas-lit lamps in the streets. And with Homes and Watney parading in the streets, you know that for better or for worse, the universe is a better place with them around to ensure London’s safety.