Satan is a Devil 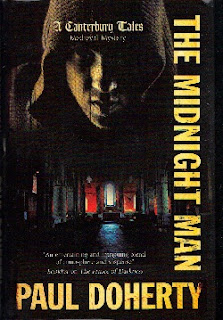 Brother Anselm and his novice Stephen are summoned to St. Michael’s Parish. The church has been the site of recent hauntings, and the mysterious warlock known as the Midnight Man is blamed for a demonic midnight ceremony that opened the very gates of Hell on the parish. But as Brother Anselm explained, these (undoubtedly) supernatural phenomena must have a human cause—its root lies in the wickedness of a human heart. And so in order to weed out these demons, Brother Anselm must find the human cause of their wickedness. Stir in plenty of ghostly Gothic atmosphere, and don’t forget that impossible crime that takes place in a locked church. And ta-da! you have the plot of Paul Doherty’s The Midnight Man.

Paul Doherty’s latest effort is a return to his Canterbury Tales series, which is my personal favourite. The premise of this series is that the pilgrims of Chaucer’s Canterbury Tales have made an agreement that, at night, each of them should tell a story about the night-time, a story to chill the blood. (This time, it’s the physician’s turn, although there isn’t a physician appearing anywhere in the story.) And so, in these stories, the supernatural goes without question. God exists, and just as importantly, so does Satan—but their inclusion doesn’t mean that you can’t have a fairly clued mystery thrown into the works!

That’s just what Doherty gives his readers, along with one of the creepier entries in the Canterbury Tales. While it doesn’t reach the level of horror that An Ancient Evil did, it’s still deliciously sinister and eerie. The entire story is really steeped in the Gothic, what with the haunted church and the shadowy figures in cowls who pose a threat to our main characters. The Midnight Man is never seen at work until he is unmaksed, and this is doubly effective— we have no idea what to expect. Some demon or phantasm? A deformed monster from Hell? With no description to go on, we cannot narrow down the list of suspects…

I’m very biased, because I absolutely love this series. This seems to be Doherty having the most fun. He seems to really love the Gothic ghost story he’s come up with, and he carefully crafts it page by page. Every atmospheric touch is effective, and Doherty can let his imagination run wild because the supernatural is allowed. Anything and everything can happen in these stories, and so it’s a doubly impressive feat that there is a rational explanation at the end into which the supernatural is incorporated. To be fair, it isn’t a mind-blowing quadruple-twist; if the reader thinks really hard about it, they’ll be able to spot the Midnight Man.

But that’s the sheer beauty of it: nine out of ten readers won’t think really hard about it. And why should they? This is a fine story told with all the skill of a grandmaster of crime. The fact that it’s a fair-play mystery is in itself astounding. I seized on the completely wrong person as the Midnight Man early on, and was dumbfounded when that person was unequivocally exonerated near the end of the book. And the locked church trick was pretty good, too. (Ha! Thought I'd forget to comment on that, did you?) That speaks volumes for either my stupidity or Doherty’s skill—and I think both the author and I would prefer to think the latter is the more correct explanation.

Once again, Mr. Doherty, a big thank you for returning to this brilliant series. Your imagination has run wild once again and has given me a few hours of tremendous reading pleasure. As a humble reader, I can ask for no more than that.


Note: Why am I reading this series out of order? Didn’t I vow to do so after reading Ghostly Murders? Well, there are two reasons: I love this series but Steve of In Search of the Classic Mystery did the chronological thing first, plus he said there were no serious spoilers to previous entries. (This seems quite true, by the way.) But more important than that, I ordered a signed copy of the book, and simply couldn’t wait long to get my greedy little hands on it to read it.