The Phantom of the Dagonet 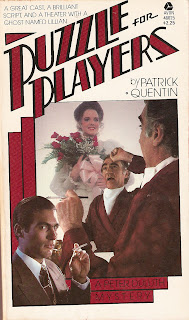 I read Puzzle for Players bit by bit with a fellow mystery aficionado, trying to piece the puzzle together before it was unveiled by Patrick Quentin. In retrospect, it might not have been the wisest reading strategy. Throughout this time, I read other mystery novels. As good as my memory is, it’s little wonder that small and seemingly irrelevant plot points got deleted from my memory. As a result, when the solution was revealed, I stared in disbelief, not remembering a single one of the facts that Patrick Quentin referred to. Frankly, I felt cheated, and although glances at previous pages revealed that some clues were there after all, the overall feeling of dissatisfaction remains, as the solution is kind of problematic. There’s an inherent weakness in the murderer’s plot that no amount of red herring can disguise, and one of its main “clues” is basically ignorant of the theatre’s workings.

That’s somewhat surprising, because Puzzle for Players is a very well-done theatre mystery. I just love these: death is hiding in the shadows in the wings, waiting to strike again, while the actors are on stage rehearsing… This particular theatre is the Dagonet, which comes complete with an age-old jinx (shows that play there constantly fail) and a ghost named Lillian, who has a nasty habit of turning up in mirrors. The theatrical atmosphere is nicely done— Quentin captures the general bedlam of backstage before the performance. The petty, pointless rivalries, the progression of the show as the performance is being moulded… It’s really nicely done.
This book brings back Peter Duluth and Iris Pattison, and by the end of the novel they become Peter and Iris Duluth. Peter is an ex-alcoholic who’s been on one murder case before, in A Puzzle for Fools (which was set in the sanatorium of Dr. Lenz). Quentin brings Lenz back for an encore performance as The Great Detective, and I didn’t like him as much. He directly causes someone’s death, but it’s all in the name of Science. And in the final pages, through divine intervention, Lenz suddenly realizes whodunit and why… although I still don’t see how he could’ve possibly seen the truth. And then there’s some strands of plot that are nothing but pointless smoke in your face— and a few of these strands are never explained. 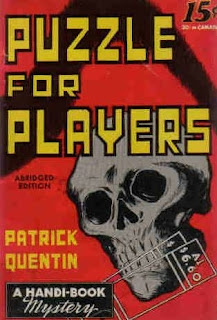 Is my dissatisfaction with the ending too apparent? To say that I hated this book would be an out-and-out lie, but it really failed to capitalize on its potential. Instead of congratulating the author for making a total ass of me, I was left shaking my fist and shouting “You swindler!” Perhaps it had something to do with the reading strategy, but once the initial seed of dissatisfaction with the ending was planted, it wasn’t going anywhere. Plain and simple: I don’t like the ending. Especially after I came up with a genius theory that was never even brought up as a possibility. I only remember the culprit’s identity— the brilliant motive I ascribed to the person was lost in the depths of my mind overnight… But I assure you it was sublime!
The characters are a delightfully quirky bunch, whether it’s Peter Duluth, the reformed alcoholic (or quitter, as I like to think of it) or Mirabelle the leading lady, who has an unreasonable hatred for her co-star. The Dagonet Theatre is big and imposing and it effectively creates some marvellous atmosphere, just like the sanatorium in A Puzzle for Fools.
Overall, in fact, the book was excellent: my grumbling mainly comes from my dissatisfaction with the ending. But let’s be honest—I’m not such a puzzle-plot stickler that I won’t enjoy a good story with a weak conclusion. Do I recommend this book? Yes, I do. It’s a very fun read and very well-written, and it does its theatrical atmosphere nicely.